We at Arcflex have over 30 years of experience in the design and manufacture of expansion bellows, joints, and more. We operate state of the art, on-site facilities in the Midlands, so are perfectly placed to serve all corners of the country. This experience, combined with our impressive facilities, allows us to offer a wide range of precision-engineered expansion bellows and joints. There are suitable for any industrial application and are manufactured to your exact design requirements. 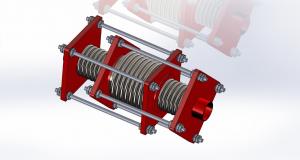 We are able to manufacture sizes ranging from DN25 – DN6000, in all materials, including the following types:

Designed to accept movement longitudinally, causing the length to increase or decrease

Consisting of two bellows and a central pipe, these are designed to absorb a greater amount of axial movement when compared with single expansion joints.

A single bellow with tie rods. This helps overcome the reaction forces and spring rates, and loads are handled within the bellow and are not transferred to the pipe line.

Two bellows with a central pipe and tie rods to withstand forces caused by internal pressure. They can withstand greater axial, lateral and angular movements than single tied expansion joints.

Accepts angular movement in a single plane, absorbing pressure internally rather than transferring it to the pipe line.

Two bellows with pipe ends or flanges, accepting angular and lateral movenents across a single plane.

Formed by cold-rolling knuckles on a flat ring, giving them unparalleled flexibility. Available as circular, square, or rectangular units.

Designed to accept axial, lateral, and angular movements, these are suitable for low pressure applications.

These absorb movement in axial, lateral, and angular directions, they are supplied in seperate halves which are then welded together. Perfect for urgent repairs and replacements.

Find out More
Need more information on our products?
Request a call back